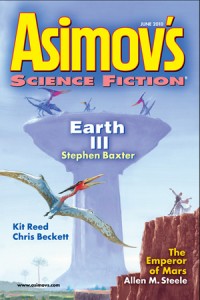 My new story ‘The Peacock Cloak’ is just out in Asimov’s SF.   It’s a bit different to anything I’ve done before – it draws on diverse sources including the gnostic-like theology of the Yazidi religion –  and I will be interested to see how people respond to it.

I love the cover.  (I assume  it  illustrates the Stephen Baxter story?).

END_OF_DOCUMENT_TOKEN_TO_BE_REPLACED

Published in Postscripts anthology #22/23, ‘The Company He Keeps’, edited by Pete Crowther and Nick Gevers, 2010.

Jacob Stone is the nominal captain and sole crew member of an interstellar cargo ship that is so totally automated his job is mainly to sit alone and wait for emergencies that never happen. The job pays well because few people can tolerate the prolonged isolation, but Jacob is a misanthrope and a miser who lives only to accumulate wealth. On one stopover he encounters another solitary ship captain, a young man with a brighter future than his own. Jacob is jealous and brags about the passengers he is carrying in his cargo hold, a group of aliens on a religious pilgrimage who travel in a kind of “dry sleep” from which they are rehydrated at the end of the journey.

They were transparent too, and hard and fragile. But these were little people nearly half a metre tall, people that resembled human beings, with hands and feet and little faces. And they weren’t really empty shells either, even if they looked that way.

Jacob continues on his journey, but now he has become obsessed with the little aliens, helpless in their dehydrated stasis; he comes to hate them just because of the way the other man admired them.

The title refers to Jacob and the shriveled state of his heart, a man who cares for nothing but himself and not even himself very much. It is the banal and casual nature of his evil that makes this one effective horror.

Virtual reality. Fabbro created an idyllic world and copies of himself to live in it, but the copies eventually began to get ideas of their own, and ambitions. Finally, after rebellions and wars, Fabbro has entered the world he made and Tawus has come to confront him, to justify himself.

“I used to think about you looking in from outside,” he said. “When we had wars, when we were industrializing and getting people off the land, all of those difficult times. I used to imagine you judging me, clucking your tongue, shaking your head. But you try and bring progress to a world without any adverse consequences for anyone. You just try it.”

There is more here than virtual reality. Tawus embodies the contradictions between determinism and free will, between progress and stagnation. This is the retelling of a much older story of creation and rebellion.  RECOMMENDED.

Welcome to my new website.  I decided it was time to replace my old homemade website with something a little smarter, and this one has been skillfully put together for me by Paul Raven of Velcro City and Futurismic fame.  I hope you like it.