We have a pond in our garden.  We dug it out twenty years ago and, though I hack the vegetation back from time to time, it became pretty overgrown with irises spilling out of their planters to create a thick jungle-like mass of stems and roots along the sides of the ponds, which gradually extended itself outwards over the water, with ivy weaving itself between its stems.  Many frogs have colonised the pond over the years, and they haul themselves out onto the thick knotted roots of the irises.  Here are five of them lying motionless in a pile, as if rehearsing (I sometimes think) for the role of iguanas in a scaled down version of Ballard’s Drowned World. 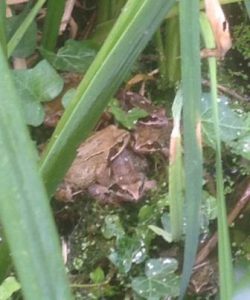 The trouble was that there was very little open water left in between the irises, and I decided yesterday it was time to remove them completely and start again.  It was a day’s work, cutting through all those roots, disentangling the plants from one another and hauling out masses of vegetation which must, in total, have been several times my own weight.  I was left with  a huge pile of greenery and roots, a rectangular pond that suddenly looked absolutely enormous, and many frogs swimming back and forth around the edges, scrabbling frantically at walls they could no longer climb.  I had left them several ways they could get out, but their familiar routes were no longer available, their familiar jungle had disappeared completely, and in the short-run they were flummoxed.

I’ve been feeling a bit like that myself lately.   Strange new things are happening in the world.  In many countries, authoritarian leaders and sinister clowns are on the rise, and institutions which seemed to provide stability and security in the past are unravelling.   Here in England, the Brexit vote exposed a deep rift between relatively prosperous cosmopolitan urban areas that voted Remain (as I did) and rural, poorer or more working class areas that felt it was time to pull up the drawbridge.  (Even within my own county of Cambridgeshire, the vote varied between 73% for Remain in the wealthy, high-tech city of Cambridge, and 71% for Leave in the poorer and more rural area of Fenland.)  No one knows where we’re headed any more, both our main political parties are riven, and one of them is rapidly tearing itself apart in a bitter and sometimes violent fight.

I’ve felt that I ought to write something about these things –after all, my novels all deal with social change– but I’ve been struggling to know what to say.  Although I voted Remain, and felt pretty grief-stricken by the result, I did not feel like joining the chorus of outraged Remainers, so unexpectedly outvoted by a mysterious Other of 17,000,000 people that had (or so you’d think!) suddenly emerged from nowhere. Many Remainers now seemed inclined to characterise Leave voters as racists or dupes.  Many argued that they should never have been given the opportunity to vote on a complex issue which only educated people could understand.  Someone, in the great tradition of the English middle-class, started a petition.  (I love the absurdity of that: a petition to overturn the outcome of a referendum!)  There was a big demo in London.  There were calls for parliament to exercise its prerogative to ignore the outcome of a nationwide vote which that very same parliament had legislated into being.  Like the frogs in my pond people were scrabbling in their familiar places, without quite grasping that the roots that they used to climb up were no longer there.

The world has changed.  It’s that kind of world. Seen from space, this stormy, restless planet flashes constantly with lightning.  My generation in the ‘West’ has lived through a long period of political stability, but in historical terms, that’s the exception not the rule. There is a way out of the pond, but it isn’t in the same place, and we need to stop looking there.

One thought on “Frogs”