In The Holy Machine I wrote:

There is one problem about being religious. You are taught that the supernatural exists – miracles, angels, the resurrection of the dead – but for some reason it always seems to happen off stage, either somewhere else or somewhen long ago. You actually have to live in exactly the same boringly unsupernatural world as do the unbelievers. It must be hard work believing in things which never actually happen.

So I don’t think it’s surprising that religious folk sometimes erupt in excitement over a statue that appears to weep, or a fish whose lateral markings spell out the Arabic letters for “God is great”, or an oil-stain on a garage forecourt that resembles the Virgin Mary …

This miraculous image of the Virgin Mary has recently appeared on a tree in New York. 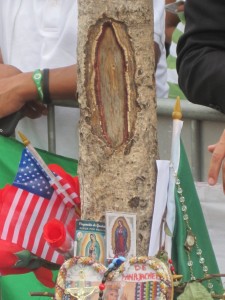 Not very convincing, but the willingness to suspend disbelief, is a measure of the depth of longing behind it.  I read somewhere that at one of the great shrines of ancient Greece, pots and pans were tied to a tree, and the oracle heard the voice of the god in the way they clanked and banged in the wind. (If the gods are really gods, why can’t they just plain speak?!)

The tree has become quite a shrine it seems.  Someone has even adorned it, for some reason, with a full-sized Mexican flag. 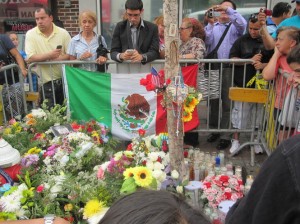