Beneath the World, a Sea

The three Eden novels are also available as a single ebook:  Eden’s Story.

‘This tricksy, elliptical study in liberal unease.’
Simon Ings’s Book of the Month, The Times

‘A fractured narrative for fractured times, Tomorrow is cool without being cold; distant and devastatingly personal.’ Jamie Buxton, Daily Mail

‘Beckett has delivered more than a novel, but an experience to dive into, to be submerged by, to float on the surface of, to be carried away on the narrative flow of something different from one of the best speculative writers around.’ Ian Hunter, Concatenation.

A would-be author has taken time out from life in the city to live in a cabin by a river and write a novel.

At first these new surroundings are so idyllic that it’s hard to find the motivation to get started. And then, in all its brutality, the outside world intervenes…

Ranging constantly backwards and forwards in time and space, and set in a country where no one has ever been, Tomorrow becomes a restless search for meaning in a precarious and elusive world.

‘Bursting with brilliantly thought-provoking ideas on almost every page, Two Tribes is one of these rare novels that leaves you looking at the world in a new way.’ James Walton, Reader’s Digest.

‘Read this for his mordant dissection of tribalism — why the sense of belonging can become so desperately destructive.’ Simon Ings, The Times.

‘Two Tribes holds up a mirror to our fractured times, stripping away the shallow concerns of contemporary politics with razor-sharp observations.’ Jamie Buxton, The Daily Mail.

Most of the story takes place in the latter half of 2016 and the beginning of 2017, and is about a brief love affair between a man and a woman who come from opposite sides of the Brexit divide and from very different backgrounds. But it’s told by a future historian in the harsher and bleaker England of 2266.

Some personal thoughts about this book:

…I don’t think it’s my job to exaggerate the ugliness of rival tribes, or big up the heroism of my own…

…Just as we see through every religion but our own, so we tend to assume that the flags flown by rival groups are either the product of delusion, or a cover for self-interest, but take our own flags at face value...

...I was very saddened by the referendum result, but I thought to myself, how would it be if instead of looking at all this as me living in an island of correctness in a sea of error, or an island of decency in a sea of intolerance, I was to look at it more in the way that, say, an outsider looks at the political geography of Belfast…

Beneath the World, a Sea

“A disturbing descent into a surreal world, written with a deft hand.” Adrian Tchaikovsky

“This novel… has so much to say, and says it via a cast of utterly compelling characters.”  Eddie Robson, SFX.

“This is a novel that feels completely unique.”  Liz Robinson, Lovereading.

My seventh novel, which came out at the beginning of April 2019.

1990: Inspector Ben Ronson travels by river boat to the mysterious Submundo Delta, somewhere in South America, passing through a Zone that no one can ever remember, into a forest from which strange inhuman creatures creep from a hidden sea, to disturb the precarious order of human minds.

This is an audio book collection of six original SF short stories by six different authors, published by Audible and only available in audio book format.  The other contributors are: An Owomoyela, Nikesh Shukla, Lauren Beukes, Ken Liu, Paul Cornell.  I’m in good company!

My story, which opens the collection, is called ‘When Will We Get There?’ 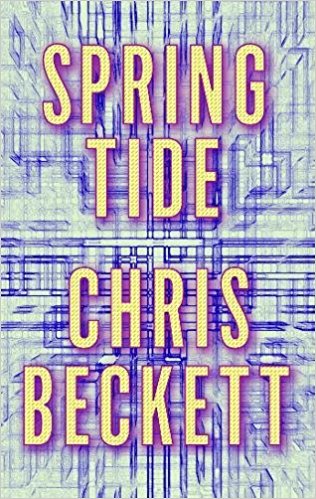 ‘A brilliantly different take on what it means to be alive in the 21st century’  Eric Brown, The Guardian (full review here)

My first published foray outside of the parameters of science fiction. Some of the 21 stories in this book include fantastical elements, some do not, but none of them (at least according to my definition) could be described as SF.

Spring  Tide audio book  (Accompanied by the worst review any book of mine has ever received!)

“An uneasy read that manages to feel both timely and urgent…”  Liz Jensen, The Guardian.

The United States a century in the future.   As a result of climate change, powerful hurricanes hit the east coast every year, each time a little further north.  And large areas of the southern half of the US have insufficient water, meaning that many towns and cities, and whole swathes of farmland, are no longer viable.  Each year a steady stream of refugees from southern states heads north, but they meet an increasingly frosty welcome, and some northern states are threatening frontier controls to keep them out.

Holly Peacock, a bright young British PR professional who has settled in the US, begins to work for a charismatic US Senator called Stephen Slaymaker, who rose from poverty via army service in Africa, to build up one of America’s largest trucking businesses.  Slaymaker is campaigning for a huge government-funded programme to shift the American population northwards, and so prevent the north-south divide from tearing America apart.    When Slaymaker stands for President, this Reconfigure America programme is at the core of his platform and Holly’s job is to win support for it.

But how to sell the idea to northern voters that they should welcome in millions of refugees from the south, and pay for it too in their taxes?  Working closely with Slaymaker, Holly finds a way, but it involves fighting dirty and has catastrophic consequences which she didn’t anticipate at all.

“A compelling finale to an award-winning saga” Guardian

Eden, only ten years after the events in Mother of Eden but on the opposite side of the great rift in the human society of Eden that occurred in the original book.

Angie, who left her original home to be become a shadowspeaker, witnesses two cataclysmic events that will change the course of Eden’s history.

More early reviews here from Gareth D Jones in SF Crowsnest, and here on the book blog For Winter  Nights.

Some thoughts of my own about this book here.

A new collection, published by the excellent Newcon Press.  It includes all the stories  written since the publication of The Turing Test.

The following are the 12 stories in the order in which they appear in the book.  The links will take you to miscellaneous thoughts about the stories, what they mean to me, and/or where they came from.  Personally, I’d read the stories themselves first.

The cover design is based on the illustration  by Eugene Kapustiansky for the Russian translation of the title story which appeared in Esli magazine.

END_OF_DOCUMENT_TOKEN_TO_BE_REPLACED

“We speak of a mother’s love, but we forget her power. Power over life. Power to give and to withhold.”

“A masterpiece”  The Guardian

Generations after the breakup of the human family of Eden. the Johnfolk emphasise knowledge and innovation, the Davidfolk tradition and cohesion. But both have built hierarchical societies sustained by violence and dominated by men – and both claim to be the favoured children of a long-dead woman from Earth that all Eden knows as Gela, the mother of them all.

When Starlight Brooking meets a handsome and powerful man from across Worldpool, she believes he will offer an outlet for her ambition and energy. But she has no idea that she will be a stand-in for Gela herself, and wear Gela’s ring on her own finger.

And she has no idea either of the enemies she will make, no inkling that a time will come when she, like John Redlantern, will choose to kill.

Mother of Eden Q & A

“..a stunning novel and a beautiful evocation of a truly alien world.”  Alison Flood, Sunday Times.

Five hundred people live in in single community in an enclosed valley on the sunless planet Eden where, over a century ago, their two ancestors were marooned.

Calling themselves Family, they still cling to the hope that one day someone will come and bring them back to Earth, where light and heat does not come from trees, but from a bright star in the sky.

group of followers out of the valley and across mountains that are not only covered in snow and ice, but are completely dark,  in search of wider lands.   It had to happen but it comes at a terrible price, for it brings bloodshed and division into the world.

A novel about how people relate to the past and how they move forward into the future..

Published by Corvus in UK, Broadway in US.  Also available in French, Polish and Russian

END_OF_DOCUMENT_TOKEN_TO_BE_REPLACED 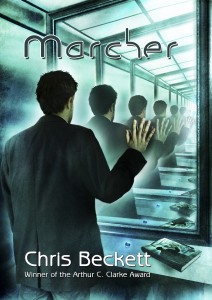 Charles Bowen is an immigration officer with a difference: the migrants he deals with don’t come from other countries but from other universes. Known as shifters, they materialize from parallel timelines, bringing with them a mysterious drug called slip which breaks down the boundary between what is and what might have been, and offers the desperate and the dispossessed the tantalizing possibility of escape.

Growing out of short stories such as ‘Tammy Pendant’, ‘To Become a Warrior’ and ‘The Welfare Man’, Marcher was originally published  in the US under the Cosmos imprint.   It is now available in a new and extensively revised edition, as of August 2014 from Newcon Press.  (More details here.)

“One of the best SF novels of the year” (Colin Harvey, Suite 101, reviewing the original Cosmos edition of Marcher)

END_OF_DOCUMENT_TOKEN_TO_BE_REPLACED

A collection of 14 short stories.  WINNER OF THE EDGE HILL SHORT FICTION AWARD 2009, and the Edge Hill Readers’ Prize.

NB: Though Elastic Press is no longer in business, this book is STILL IN PRINT.  It is also available on Kindle.

‘I suspect Chris Beckett winning the Edge Hill Prize will be seen as a surprise in the world of books. In fact, though, it was also a bit of surprise to the judges, none of whom knew they were science fiction fans beforehand. Yet, once the judging process started, it soon became clear that The Turing Test was the book that we’d all been impressed by, and enjoyed, the most – and one by one we admitted it.

‘This was a very strong shortlist, including one Booker Prize winner in Anne Enright, and two authors who’ve been Booker shortlisted in Ali Smith and Shena Mackay. Even so, it was Beckett who seemed to us to have written the most imaginative and endlessly inventive stories, fizzing with ideas and complete with strong characters and big contemporary themes. We also appreciated the sheer zest of his story-telling and the obvious pleasure he had taken in creating his fiction.’

The Turing Test at Hive UK/Waterstones /Amazon UK / Amazon US