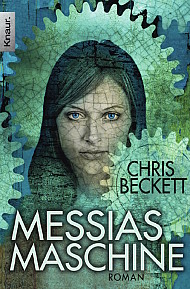 Buy from Amazon UK / Amazon US.

Messias-Maschine  (The Holy Machine in German): on Amazon.de

US editions of The Holy Machine published by Wildside in 2004, and Cosmos in 2009 are no longer in print but are still  available from some dealers.

“…An inspirational read, and a great antidote to the barrage of militaristic techno-thrillers that are saturating the market…” – Paul Raven, Velcro City Tourist Board

“This isn’t just good sf – this is the kind of sf that should be written, that we ought to be out on the streets outside publishers demanding should be written…” – Gary Gibson (author of Angel Stations, Against Gravity, Stealing Light).

” Religious fundamentalism has swept the world and the city state of Illyria is the last redoubt of rationalism, politically imposed and brutally draconian. Illyria uses robots, or syntecs, in place of foreign workers, and one of the many menial jobs imposed on the syntecs is prostitution. Translator George Simling, an introverted loner, falls in love with syntec Lucy, and when the state starts to erase the programs of robots who appear to be developing consciousness, George and Lucy escape to a neighbouring religious state on an odyssey destined to bring enlightenment and tragedy. In his depiction of Simling’s touching and hopeless love for Lucy, Beckett examines the interface between human and machine, rationalism and the religious impulse, with the spare prose and acute social commentary of a latter-day Orwell.” Eric Brown, The Guardian.

Review in Strange Horizons by Michael Levy. “…There are very few sureties in The Holy Machine.  George, Lucy, Ruth and Marija all undergo profound changes, some of them quite unpleasant, but, by the end of this very fine novel, each character has achieved some measure of both agency and joy.”

Review by ‘Libris Leonis’ (2012).  “….one of the most thoughtful and intelligent novels I have read in a very long time”

Review by ‘Freethinking: a journal of popular culture’.  “…I absolutely loved this book which reminded me why I loved SF… This is the book that you give to people who think they don’t like SF. It has a heart and a brain.”