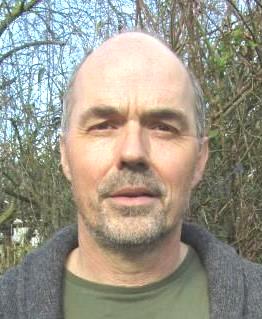 I am a former social worker, social work manager, and social work lecturer.  I live in Cambridge in the East of England with my wife Maggie.  I have three adult children and three grandchildren.  Born in 1955, I am somewhat older than I was in this picture.

Most of my published work is science fiction, but some isn’t.  I see myself as a writer full stop, rather than specifically as a science fiction writer.  My stories are usually about my own life, things I see happening around me and things I struggle to make sense of.  But, until quite recently, they’ve always ended up being science fiction.  I like the freedom SF gives me to invent things and play with ideas.  (If you going to make up the characters, why not make up the world as well?) It provides a bit of distance too, which all writers need.

I think, by the way, that it’s a mistake to think of science fiction and fantasy as sidelines and of naturalistic fiction as the ‘mainstream’.  Most of the early classics of literature were what we would now call ‘fantasy’, with magic, imaginary beings and so.  Think of the Odyssey, Beowulf, the Icelandic Sagas. Naturalistic fiction is a  specialist subgenre of fantasy which, although it is really ‘made up’ and  often wildly unrealistic, nevertheless wears the clothes of real life. Science fiction is a reversion to a more overt kind of fantasy, written for an age in which we no longer believe in magic, but in which magic does in fact actually exist:  an age in which we can fly to the moon, talk to machines, send pictures to the far side of the world, sew the living heart of one person into the body of another…and new things keep coming along.

My books and stories

I have been publishing short stories since 1990.  The first to appear in print was ‘A Matter of Survival’  in Interzone, the most durable of British SF magazines, and the foundation on which I built my career as a writer.  The next two stories published there, ‘La Macchina’ and ‘The Long Journey of Frozen Heart’  were prototypes for my first novel, The Holy Machine.  I took unpaid leave from my job to write The Holy Machine in 1994.  I rewrote it, pretty much in its final form, in 1997, but it did not get published until 2004, by Wildside in the US.  In 2009 it was reprinted under the Cosmos label, along with my second novel Marcher, the novel of mine which draws most obviously on my experiences as a social worker.

My next book was a short story collection, The Turing Test, published by Norwich based small press, Elastic Press, whose founder, owner, editor, proofreader, salesman and everything else-man, Andrew Hook entered the book for the Edge Hill Short Fiction award, which it won in 2009.

The Holy Machine was republished in a new edition by Corvus in 2010.  It is an everyday tale of a shy young man who falls in love with a newly sentient sex robot, and escapes with her to a land ruled by Christian fundamentalists, where robots are hated and destroyed.   Being sentient, he and the robot discover, is not the same thing as being human.

In 2012, Corvus published my third novel,  Dark Eden, about a small human community marooned on a sunless planet.  My most successful book by many measures, it went on to win the Arthur C. Clarke Award.

The theme of story-telling continues in America City, whose main protagonist, Holly Peacock, is an ambitious young British publicist who wins the American presidency for a charismatic politician called Stephen Slaymaker.  It’s set at a time when an internal refugee problem brought about by climate change is in danger of tearing the country apart.  (America City has a number of thematic links with Mother of Eden: the ambitious young woman with a gift for communication, the ruthless older man she admires…   It can also be read, if you wish, as a prequel to the Eden series.)

My third short story collection, Spring Tide was my first foray outside the conventions of science fiction, published in January 2018.   My novels tend to deal with ‘big’ things -politics, revolution, religion, myth- but many of these stories take place at a more individual and personal level.

Beneath the World, a Sea is about a strangely neglected place in South America called the Submundo Delta.  It is inhabited by unique life forms, completely unrelated to the rest of life on Earth.  These have powerful and disturbing psychic effects on human beings, and particularly on the main protagonist, Ben, a bottled-up policeman from London.

Two Tribes is about Brexit, narrated by a historian from the future.  It’s also about social class, and our tendency to surround ourselves with people like ourselves who constantly confirm our own beliefs and prejudices.  And it’s a love story of sorts, about the relationship between Harry, a remain-voting architect from North London, and Michelle, a leave-voting hairdresser from rural Norfolk.  Is it a science fiction novel?  I’d say it’s a realist novel with a science fictional framing device.

Tomorrow, written during the Covid lockdown in 2020, is about a writer who retreats to a remote cabin by a river to write a novel – a book like no other, a book that encompasses everything – but is constantly distracted by other things, including being kidnapped and held hostage by guerrilla fighters.  It’s set in the present time, but in an imaginary country.