America City began as a short story called ‘Destiny’.   The story itself was never published, its basic flaw being, I realised, that it wasn’t really a short story at all, but an idea for a novel.  I’ve just checked and, to my suprise, I find that I wrote it as long ago as summer 2012.   Holly Peacock wasn’t in the story, but the basic set-up of America City was there and so was President Slaymaker.

Originally, I was going to write this book after completing Mother of Eden.  I started work on the novel in 2015, under the working title of Slaymaker, but in the end I decided I wanted to complete my Eden trilogy first, so I set Slaymaker aside to write Daughter of Eden.

The fact that the novel that became America City was originally going to be my next project after Mother of Eden is I think visible in the book.   For instance, the relationship between Holly and Slaymaker is a little like the relationship in Mother of Eden between Starlight and  Greenstone’s father, Firehand: an ambitious, restless, rootless young woman from a community which values gentleness and fairness, is fascinated by, and feels an unexpected affinity with, a powerful, charismatic and ruthless man a generation older than her, who doesn’t value those things very much at all.  (Firehand dies quite early in Mother, so I didn’t get a chance to develop the relationship very much there.)

In both books, too, the ambitious young woman sets out to sell a political idea, and the idea has unintended consequences, as political ideas always do.   Both books also make some use of interspersed scenes from the viewpoint of peripheral characters to show the impact of what the major players are doing.

But then again, Mother is set in a sort of bronze age society on a planet with luminous trees and no sun, while America City is set in 22nd century America.  And Holly helps Slaymaker, while Starlight sets herself against what Firehand believed in.

When I settled down again to write America City in 2016, and through into the beginning of 2017, it was against a new backdrop of real political events: first the Brexit vote in the summer of 2016, and then the rise of Donald Trump.  Obviously the book is deeply influenced by my thoughts about why and how these things happened and what I felt I was learning about how politics work.

I felt very challenged by the fact that the 2016 Presidential election was going on as I wrote the book.  Here I was, writing about an American politician winning an election by appealing to the tribal instincts of voters, and meanwhile in real life…

In fact, in some respects what was happening in reality was stranger than what was happening in my book.   I’m biased of course, but if I compare Slaymaker and Trump, it’s Trump who seems more like a made-up character.  So there was a while there when I felt like the real world was overtaking me on the inside lane.

I got the name Slaymaker from an administrator at the school of social work at the University of East Anglia, where I was working when I first came up with the idea.  Her name is Eve Slaymaker.  Names are important.  I built the whole character around this amazing surname.

There was another administrator there at the time called Hollie Peacock, and I borrowed her name as well.

I don’t often sit down and draw things for a book, but I did design this flag.  Holly comes up with it, some way into the book, while passing the time on a flight to Washington, DC. 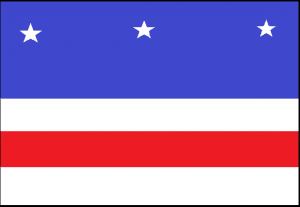