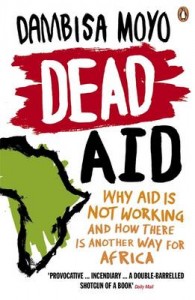 I wrote here previously about my distaste for a new Oxfam ad, which seemed to me to perpetuate the nauseating stereotype of Africa as a pathetic and helpless victim dependent for its salvation on the outside world.  (I wonder how much investment has been lost to Africa as a result of this stereotype, perpetuated, ironically, by aid agencies trying to use pity to get money from us to help Africa?)

My daughter Nancy recently spent a year in Malawi, one of Africa’s poorest countries, and my wife and I spent two weeks there with her.   As we drove across the country, the delivery end of the aid business was everywhere in evidence.  One after another along the wayside were clinics, schools and orphanages funded by European and American aid agencies.  The Malawian government itself has something like half of its budget provided by foreign aid.

Malawi is a delightful country – its people are friendly, interested, and courteous in a charming old-fashioned kind of way, and certainly not pathetic or helpless – but I felt uncomfortable about what I was seeing.  Where was all this going?  Is it useful, healthy, or even sustainable in the long run, for a country to have its basic services largely provided by external donors, and often administered by them as well?  Was this really ever going to help the country reach a point where it could fund its own institutions?  Where were the industries, where were even the beginnings of the industries, that would make this possible?

So I found myself asking the question: does aid really help?

Certainly the evidence thus far is not encouraging.  As the Rwandan President, Paul Kagame, observed: “In the last 50 years, you’ve [the rest of the world] spent US$400 billion in aid to Africa.  But what is there to show for it?”  Dambisa Moyo – she is a Zambian economist – observes that just 30 years ago Malawi (among other countries) had a per capita income that was higher than that of China. Why has one country shot ahead, and the other remained stuck in a state of dependency?

Well of course there are a number of possible reasons for this, and I couldn’t help feeling that Moyo skated rather lightly over some of them. (China, after all, has been a state and an urban civilization for thousands of years, long before any country in Europe, while Malawi, like most African countries, is a recent invention, and its modest cities have only existed for a century or so).   However I remained struck by Moyo’s thesis, which is that, far from being a solution to Africa’s problem with development, aid is in very large part its cause.

Aid supports rent-seeking – that is, the use of governmental authority to take and make money without trade or production of wealth.  At a very basic level, an example of this is where a government official with access to aid money set aside for public welfare takes the money for his own personal use.  Obviously there cannot be rent-seeking without rent.

It isn’t just a matter of outright corruption, though.  In all kinds of ways, Moyo argues, aid creates a system where the best way for ambitious people to get on is to gain access to the money tap, rather than to create wealth themselves.  A mineral resource such as oil can have a similar effect, resulting in a country’s elite simply living on the income derived from the sale of that resource, rather than building up an economy that would deliver wealth when the oil has gone.

Indeed, aid may not only discourage local economic activity, it may even actively undermine it:

There’s a mosquito net manufacturer in Africa.  He manufactures around 500 nets a week.  He employs ten people who (as with many African countries) each have to support upwards of fifteen relatives…

Enter vociferous Hollywood movie star who… goads Western governments to collect and send 100,000 mosquito nets… at a cost of a million dollars.  The nets arrive, the nets are distributed and a ‘good’ deed is done.

With the market flooded with foreign nets, however, our mosquito net maker is promptly put out of business.  His ten workers can no longer support their 150 dependents (who are now forced to depend on handouts) and one mustn’t forget that in a maximum of five years the majority of the imported nets will be torn, damaged and of no further use….

The gift of nets, in other words, creates a need for more gifts, and so on and on.  It’s not hard to see how such a pattern, repeated in many different ways and at many different levels, could indeed result in a permanent dependency on external aid.

Moyo advocates a gradual phasing out of aid as we now understand it, and discusses a range of different ways in which Africa could begin to finance its own development.  Her suggestions include trade, a sore point for Africa since most donor countries take away with the left hand what the right hand has given by denying Africa fair access to their markets, but Moyo points out that there are other new trading partners in the rest of the developing world (notably China and India), and opportunities for trade within Africa itself, or indeed within single countries.  They also include foreign direct investment in capital projects (such as China is now enthusiastically engaged in), borrowing money in capital markets, use of micro-finance (a means of providing small loans for local businesses which has been very effective in other parts of the world), and making better and more effective use of Africa’s own savings.  (Apparently there are huge quantities of savings in developing countries, but in the absence of access to an appropriate banking system, they are often simply held in cash, or in the form of other assets like gold, with the result that they are not available to the economy: ‘borrowers cannot borrow, and lenders do not lend’).  To those who might object that African countries would find it difficult in raising money in these kinds of ways, Moyo’s response is that dependence on aid is one of the things that make it difficult.

I’m no economist, and I’m not familiar with the literature on aid and development (as I am sure would be evident to any development expert reading this post), but I found her arguments compelling.   I suspect many people of a leftish persuasion would be inclined to dismiss her essentially market- and business-orientated solutions out of hand, but I don’t feel so inclined myself.  Another thing that struck me about Malawi (based on my own observations and those of my daughter) was the very visible presence of European and American development professionals, travelling back and forth across the country in their SUVs, doing deals, attending meetings, enjoying a bit of R & R with their families in lakeside resorts.  I’m not saying these weren’t good people doing their best, but I would much rather have seen business people looking for opportunities for investment and trade.