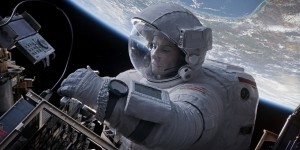 I see so many films and read so many books that don’t really touch me and leave no lasting trace at all, but this film really got into me.  For a long time afterwards, I kept coming back to it, turning it over in my mind.  (There’s a clip here if you didn’t see it.)

But what was so good about it?   The effects of course are wonderful, and space is of course the obvious subject matter for a 3D film, but the plot is almost laughably simple, and, in spite of the realism of those effects, it does require you to accept some fairly chunky implausibilities.   So what made this film so special?

I think the secret lay in what in itself was a very simple and commonplace story-telling move.  Quite early on it’s established the main, and soon to be sole, protagonist, played by Sandra Bullock, has suffered a devastating loss: her own child, dead at the age of four in a freak playground accident.   This isn’t laboured particularly, but the events of the movie provide such a perfect parallel with that experience that it doesn’t have to be.  A shower of debris that no one could have expected suddenly arrives, and the space shuttle which up to now has been an island of air and warmth becomes as empty and barren as the void outside.  The only hope lies in abandoning it altogether and venturing out across the emptiness.

3D movies achieve the illusion of depth by presenting the same scene from two slightly different angles, and story-telling works like that as well.   You need more than one angle if the thing is to come alive.   Here, the story in front of us and its amazing imagery combine with the story of the woman’s past to create a really wonderful meditation on the precariousness of existence.