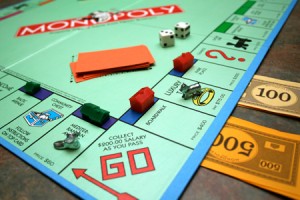 In my other life (I work part-time as a lecturer), I’ve sometimes used a rigged monopoly game – a game where one person starts off with, say, ten times as much money as the other, as a way of representing the unfairness of life.  I used it in a text book too.   The point I wanted to make was  not only that life is unfair, but that it is so unfair that, if it was a game, most of us would refuse to play.

I only recently found out (thanks to Thure Etzold) that a rigged monopology game has actually been used as the basis of a psychological experiment to explore the effect of wealth on human behaviour.  Paul Piff observed games of monopoly between pairs of players, randomly assigned to advantaged and disadvantated positions.   Even though they knew the game was rigged to make it virtually certain that they would win, advantaged players would start to act in a more arrogant way towards their adversary.  If we are doing better than another person, the experiment seems to suggest, we start to feel superior to them, even if our rational head knows that our success is none of our doing.  Financial success means status, and status means we can push other people around.

This is consistent with other studies by Piff in which he found that, for instance, expensive cars are less likely to stop at pedestrian crossings than cheaper ones, and that better-off people in psychological experiments are more likely than poorer ones to help themselves to sweets that they have been specifically told are there to give to children in another study.   If you haven’t come across this work, there’s a PBS video here, and an article here.