Already long ago, from when we sold our vote to no man, the People have abdicated our duties; for the People who once upon a time handed out military command, high civil office, legions — everything, now restrains itself and anxiously hopes for just two things: bread and circuses (Juvenal, c100 CE: Satire 10.77-81)

A public that pays more attention to reality TV than its status as free citizens cannot withstand an unremitting encroachment on its liberties by calculating, unscrupulous and power-hungry leaders (Mike Lofgren, The Party is Over, 2012 CE) 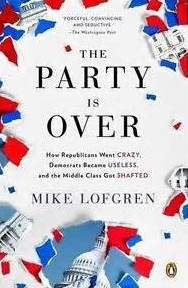 I haven’t even finished reading this book yet, and I may well have more to say about it later.  It is packed with sharp, pithily expressed and extremely scary observations about the break-down of the American political system and its corruption by corporate money.  A Republican who worked as a staffer in Congress for nearly 30 years, Lofgren is pretty scathing about the Democrats, but his most bitter attacks (at least so far) are directed against his own party which he describes as becoming less and less like a political party and more like ‘an apocalyptic cult’.

What he really exposes is a kind of doublespeak in which strident claims to be defending something – the constitution, liberty, democracy, the national interest- are used to conceal attacks on that same object.  ‘Let us now dispose,’ Lofgren writes, for instance, ‘ of the quaint notion that the present-day Republican Party is conservative.’   He defines the GOP, as it now exists, as a ‘radical right-wing party’, which doesn’t really conserve and protect anything, for all that it invokes the memory of a romanticised past, but seeks to completely transform society in the interests of the very wealthy* using whatever means possible and with a kind of Leninist ruthlessness.

The American political system works in a very different way from the British one, but there is much here that is familiar to a British reader all the same.  For instance:

The GOP reflexively scorns so-called elites (by which it means educated, critical thinkers) to mask the way it is utterly beholden to the true American elite.

I am particularly struck by Lofgren’s observation that the current Republican Party deliberately seeks to undermine the credibility of government itself:

Should Republicans succeed in preventing the Senate from doing its job, it would further lower Congress’s favorability rating among the American people. In such a scenario the party that presents itself as programmatically against government – i.e., the Republican Party – will come out the relative winner.

Undermining Americans’ belief in their own institutions of self-government remains a prime GOP electoral strategy.

A UK parallel is the relentless attack on the quality of public services, which is always ostensibly in the name of making them better, but which in fact reduces the standing of the services themselves.   But we also have a culture of cynicism about politicians and government in general, and I’ve long thought that (for instance) leftish comedians should be more aware of whose interests such routine and unfocused cynicism actually serves.

*Interesting fact: according to Lofgren under Eisenhower’s Republican presidency in the 50s, the top rate of income tax in the US was 91%.  Even the new leadership of the British Labour Party, characterised by many as unelectably left-wing, only proposes a top rate of 50%.