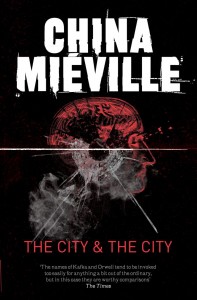 I live in Cambridge where, every summer, hundreds of foreign teenagers descend on the city to attend the various language schools.   Often they move around in large crowds, instantly recognisable because of the standard issue language school backpacks and t-shirts.  Often they hire bikes (this city is, after all, the UK capital of bicycles), and can be seen wobbling along in groups, sometimes on the wrong side of the road, or even going round roundabouts the wrong way.

And the thing that strikes me about them is that they are not really here.   Physically they are in Cambridge, but they aren’t really present in it.   We notice their language school livery and their Latin looks and pay no further attention, dismissing them as transients who will soon be gone. They hardly see us at all.  I even tested this once.  A group of Italian boys were walking towards me, filling up the entire width of the pavement.  They needed to make room for me.  The only way I could have got out of their way was to press my back up against a wall.  But I kept walking, and sure enough one of them walked straight into me.  He looked startled, as if surprised to discover that I was actually solid.

You see the same thing with British tourists abroad.  Waiters fetch things for them, but they hardly even make out the waiters’ faces.  Physical location is only one aspect of where we are, and not really, most of the time, the most important one.  We are much more interested in other kinds of nearness.  Look at someone walking down the road, talking to a lover on a mobile phone.

In The City & The City, China Miéville draws attention to these other kinds of nearness and distance, by imagining a place where it is not just normal to ignore and discount much of what is physically present, but actually compulsory.  The two city-states of Beszel and Ul Qoma occupy the same piece of territory, and are so interwoven that, in some places, they share the same streets.   But their citizens learn from an early age to ignore the parallel city alongside their own, seeing only their own buildings, and their own people, and noticing, but then immediately ‘unseeing’, the buildings and people of the other place, whose otherness is signalled to them by small differences that they’ve learnt to instantly recognise (rather in the way that, so I’m told by people who come from there, Northern Irish folk establish almost at once whether someone is a Protestant or a Catholic) .  A person in Beszel, therefore, must not stare at, think about, speak to, or in any way acknowledge a person in Ul Qoma, even if in terms of purely physical space, they live next door to one another.  To violate this principle is to commit ‘breach’, and is a serious crime.

But this is not the same thing as saying that each city must deny the existence of the other, or that Ul Qomans and Besz must never meet.  On the contrary.  It is perfectly possible to travel from Beszel to Ul Qoma, with the necessary visas, by passing through a border post.  Having crossed over, and been issued with a visitor’s badge, a person from one city may return to the same physical spaces he normally inhabits, but as he is now legally ‘in’ the other city, he must now ‘unsee’ his own city, but may look at leisure at the sights that, when ‘back home’, he would have been forbidden to notice.  Miéville has fun with the ramifications of all this: there is even an ‘Ul Qomatown’ within Beszel, which Besz people might at first glance feel obliged to ‘unsee’, since it superficially resembles Ul Qoma.

This is one of those books (like, for instance, Christopher Priest’s Inverted World, which I discussed here previously, and like much of Kafka and Borges), which works by unfolding the implications of a single odd premise, while allowing its metaphorical possibilities, its resonances with the real world we actually inhabit, to gradually take root in our minds.   The story is a police procedural, about a Besz policeman investigating a murder which turns out to have Ul Qoman ramifications, and this provides a device by which we can gradually learn more and more about the relationship between these two states.   As the policeman attempts to solve the murder, the reader (or myself at least), is equally absorbed by the possibility of in some way getting to the bottom of the nature of this cleft city, and of the shadowy institutions, beyond the ordinary police of the two states, that maintain their separate existence, by punishing breach violations that might be as small as looking at a shop window in the ‘other’ city.

It gets a little busy and plot-driven towards the end – when it is being made to deliver the solution to the crime required by the police procedural genre, this strange imagined world does feel a little as if it is being crammed into a space that is just too small for it  –  but this is an original, clever and compelling book.  The single scene which most haunts me, is one in which the detective Borlú, during a working trip to the foreign country of Ul Qoma, walks down the Ul Qoman street that, in terms of physical space, is the street he lives in back in Beszel: he passes, but carefully unsees, his own front door.

The City & The City on Amazon UK.

Incidentally (and this is the kind of thing that you learn when you have a Wikipedia dependency as bad as mine), there really does exist a pair of intermingled towns in two different countries.  The Belgian town of Baarle-Hertog consists of more than twenty enclaves in and around the Dutch town of Baarle-Nassau.  There are even Dutch enclaves within the Belgian ones.  See here for more.

2 thoughts on “The City & The City, by China Miéville”