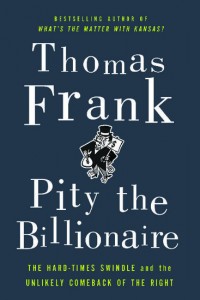 The Great Depression between the wars resulted in a grassroots backlash against capitalism, and moves towards greater state intervention in the economy, but, in the US today, the most significant political movement to have arisen out of the current economic crisis, is one that calls for still less state intervention.  Thomas Frank illustrates the difference between the two eras by contrasting the ways in which the 1773 Boston Tea Party was invoked in each one.  In 1932, a farmer who took illegal direct action to support his demand for government help for poverty-striken farmers, justified his action by saying ‘Seems to me there was a tea-party in Boston that was illegal too.  What about destroying property in Boston harbour when our country was started?’   But ‘what makes the rebel’s blood boil today,’ Frank writes, ‘is not the plight of the debtor but the possibility that such “losers” might escape their predicament – that government might step in and do the things that those Iowa farmers wanted it to do eighty years ago.’  At a Tea Party rally in 2009 one sign read ‘Your mortgage is not my problem.’  (Given the popularity of Christianity on the American Right, I’m intrigued to know how ‘Your mortgage is not my problem’ can be squared with ‘Love your neighbour as yourself’ [Matthew 12:31], but let that pass.)

This excellent book, packed with pithy observations, is an exploration of a bizarre phenomenon: a crisis caused by unfettered capitalism, followed by populist demands for yet more unfettered capitalism.  The apparent contradiction is explained in part by the fact that this new political movement doesn’t identify the core problem as the collapse of the capitalist financial institutions, but rather as the government bail-out that followed, not only because it resulted in a debt which the taxpayer has to pay, but because it distorted the workings of the market.  Ironically enough, given their hatred of the term ‘liberal’, this lot are extreme economic liberals.  They view the free unfettered market as being the God-given natural order, and any intervention into it as unnatural, tyrannical and ‘socialist’.  (‘Clear-thinking Americans must begin to view Socialism as a prosecutable crime and recognize those who conspire to advance it as in fact criminals,’ chillingly writes one Tea Party pamphleteer cited by Frank.)

To some degree I agree that markets are ‘natural’, in the sense that I believe that people will, almost inevitably, do deals with one another, and try and get the best return they can for their work.  (It happened even in states such as the Soviet Union which tried to abolish the market.)   But politics are also ‘natural’ in this exact same sense of stuff that is bound to happen, bound to be part of the picture, as is expecting the community as a whole to help out in a crisis, collective action etc etc.   Capitalism, and the notion of the ‘free market’ are, after all, very recent historical developments,  and, as Frank points out, the ‘pure Capitalism’ that these people dream about has never existed, and could never exist.   It is a one-dimensional concept, an essentially Utopian idea which, like all Utopian ideas, only works if you exclude reality from your worldview.

Frank is interesting on the way in which this libertarian right wing mirrors, sometimes quite consciously, the left.   It uses the language of injustice and class war, for instance, to pit ‘ordinary decent Americans’ (including billionaires!) against a ‘liberal’ elite, which it sometimes characterises as fascist or Nazi.  And Frank sees its adherents as blinkered in much the same way as the leftists who visited Stalin’s Soviet Union in the years after the Depression, and managed to avoid noticing famine, terror and gulags, and see instead a socialist Utopia.  What is terrifying in all these cases is the capacity of human beings to persuade themselves that something is its exact opposite.  ‘Freedom is Slavery’, ‘War is Peace’, ‘Poverty is Plenty’, went the slogans in Orwell’s Oceania, and now we have billionaires as victims, liberals as Nazis, and poor people as the cause of the problem.

Of course, as Frank points out, the misty soft-focus dream of an America consisting of decent hard-working business people (regular guys like you and me) competing in the market place, is essentially a facade (rather in the same way, I suppose, that the rhetoric and iconography of socialism was used as a facade for tyranny under Stalin).   The folksy Tea Party rhetoric distances the movement from big business, depicting the latter as monopolistic, in cahoots with the state, on the scrounge for subsidies and lucrative government contracts, but it is nevertheless big business’s purposes that the Tea Party serves.

We have no exact equivalent of the Tea Party in the UK, but there are plenty of people here who have taken the opportunity presented by the crisis in capitalism, to roll back the state still further, and give unfettered capitalism still more freedom to act.   I strongly recommend this book.

Pity the Billionaire on Amazon UK.