I am a slow writer, and ideas take a long time to brew.  The first description of the Eden forest, in the short story called The Circle of Stones (which also includes an early version of a central scene of the novel, and early prototypes of several characters), was published 20 years ago.

At that time I owned an Amstrad computer, the kind with the black screen on which the writing appeared in shining green letters.   And I’m fairly sure that this was where I first got the idea from for the Eden forest.

If you write things (and let’s face it, a large proportion of us do spend much of our lives, staring at screens and writing things) your visual field is frequently occupied by patterns of letters.  Repetitive patterns seep into your dreams and your imagination.  Its the same if you spend the day weeding the garden, or driving, or hanging wallpaper.

Letters on the page have always struck me as resembling forests, with clearings at paragraph breaks.  (Somewhere, in some old notebook, there’s a story of mine about people wandering in a winter forest – spiky bare black trees growing out of snow – not knowing that they are just  characters in a story.)

The forest of Eden relates to the forests of Earth, in much the same way as the Amstrad screen relates to conventional black letters on a white field.   In the Eden forest, the trees, instead of being defined by the light around them, are themselves the sources of light, just like those green letters on the black screen.

So I suppose, in some ways, I have Alan Sugar to thank for that particular idea. 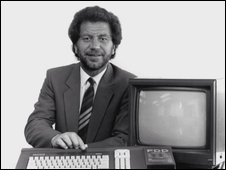