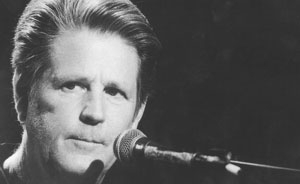 I referred to the work of Philip Dick previously as something that I particularly admire.   Here is another tortured Californian who I also admire.   I’ve seen him perform a couple of times in recent years, on his Pet Sounds and Smile tours of the UK.  The beautiful clear voice of his youth has gone, and, of all rock stars, this frail-looking man is surely the most uneasy and vulnerable on the stage, to the point where the audience seemed to me to be not just applauding him, but reassuring him of its love so as to help him keep going.  But his music as ever is sublime, soaring, stately, and, despite his abusive childhood and his precarious mental health, peaceful and full of hope and love.

He’s recently reunited with the surviving Beach Boys (his brothers, Carl and Dennis, are of course dead), and recorded a new album.   The single ‘That’s why God made the Radio’ doesn’t exactly push out into new musical territory, but still has all the qualities that makes Wilson’s music such a sweet balm.  Many tortured souls make tortured art, but with Wilson, it is as as if he set himself to build in music, the peace that was missing from his life.