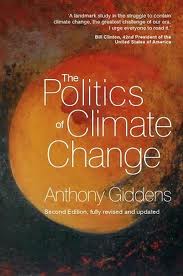 In a previous post, I discussed this video clip of an American woman, emerging from a cinema after seeing the film ‘Chasing Ice.’   She’s clearly on the conservative side of the  American political spectrum.  ‘I love Bill O’Reilly,’ she says (he’s a right-wing commentator on the Fox News channel), ‘I watch Bill O’Reilly every day, and I’m proud to be an American, but…’

It’s the ‘but’ that fascinated me, the ‘but’ that she felt obliged to insert before she went on to say how badly she’d been shaken by the movie and how, in spite of previous scepticism, she now recognised climate change as a reality and a threat.   Why a ‘but’ rather than an ‘and’?   If you are proud of your country, doesn’t it logically follow you’d want to protect it from being ravaged by drought, storms and global chaos?  Surely protecting a thing is something you do because of your love for it, not in spite of it?

I’m only pretending to be surprised though.  Politics is a very tribal thing.  All of us (liberals and lefties as much as conservatives) tend to subscribe to approved clusters of beliefs, rather than working out for ourselves what we think about each individual issue.  The newspapers we read, peer group pressure, our own inertia – all tend to have the effect of homogenising these clusters of beliefs, so that we end up with a comforting ‘us’ and ‘them’ (and thus a linear dimension – left-right, liberal-conservative –  to represent the entire multi-dimensional space of possibilities).  These are ‘our’ views.  Those are ‘theirs’.  And of course ‘their’ views are always based on ignorance, fear, self-interest, or a refusal to face reality, while ‘ours’ are always based on wisdom, courage, decency and deep understanding of the world.

It so happens that a concern about climate change has come in America and elsewhere to be associated with the political left.   Research cited by Giddens in this book shows that Democrats are almost twice as likely as Republicans to believe that global warming is a reality, and more than three times as likely to believe that it is the result of human activity.  That’s why the woman in the clip says ‘but’.  She knows this is an idea that is associated with ‘them’, and she wants to make clear that her essential loyalties remain, nevertheless, unchanged.   (I know how she feels.  It’s uncomfortable to admit to a view that doesn’t fit the consensus of the group that assumes you are ‘one of us’.)

One of things that I appreciated about this book is that Giddens identifies this as a problem.   A concern about climate change really should not be associated with a particular political position:  (a) because a change in the global weather system is going to affect everyone’s children and grandchildren, whatever they happen to believe about the appropriate mix in society between state and private enterprise (and all the other issues on which we disagree politically), (b) because nothing useful is going to happen if this remains just another political football to be kicked back and forth between two teams:

“Responding to climate change should not be seen as a left-right issue.   Climate change has to be a question that transcends party politics, and about which there is an overall framework of agreement that will endure across changes of government. (p 74)”

In the same vein, Giddens also argues that we need to be very careful not to automatically conflate climate change with the usual ‘green’ concerns.  Being ‘green’ is of course another cluster of beliefs and lifestyles, which are assumed to all belong together but may in fact need to be disaggregated:

“For example, a key green value is that of ‘staying close to nature’ – or, more briefly put – conservation.  It is a value that has a certain aesthetic quality to it.  It is very possibly important to the good life, but it has no direct relevance to climate change.  Clashes can easily occur between conservationist values and policies relevant to global warming – for example, conservationists might resist the building of a nuclear power station, or a wind farm, in a particular area of the country.”

Greens of course (with a few exceptions) usually hate nuclear power, and Giddens acknowledges that “the connection between nuclear power and nuclear weapons, the possibility of nuclear terrorism and the difficulty of disposing of nuclear waste” but one of the overall thrusts of this book is that “no course of action (or inaction) is without risks; and that, consequently, there is always a balance of risks and opportunities to be considered in any policy context.”

He calls this ‘the percentage principle’ (as opposed to the precautionary one).  I know it well from my career in social work. We can’t eliminate the possibility of nasty thing happenings, not least because reducing the risk of one nasty thing typically increases the risk of others.  If we are to avoid the worst consequences of runaway climate change, therefore, we will be need to willing to take some risks, and to accept some changes that, in themselves, we don’t particularly welcome.

I wouldn’t say this was a great book.  It helped me to crystallise a few existing thoughts, rather than providing me with new ones that had never occurred to me.  But it was worth reading.

Climate change is an odd kind of threat, as Giddens points out:

“Since the dangers… aren’t tangible, immediate or visible in the course of day-to-day life, many will sit on their hands and do nothing…  Yes waiting until such dangers are visible and acute… before being stirred to serious action will be too late.”

He calls this Gidden’s paradox.  I’m not sure the thought is so original as to justify him naming it after himself, but the problem is real enough.   The way to get round it is to keep foregrounding the issue, and for that reason, as much as any other, I think this book is to be welcomed.

2 thoughts on “The Politics of Climate Change, 2nd ed, by Anthony Giddens”