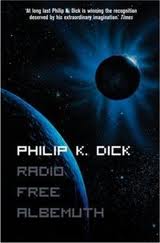 I have probably read more novels by Philip K. Dick than by any other author (possible exception: Captain W.E. Johns, whose works I read voraciously when I was about 9 or 10), but I still haven’t read much more than a quarter of his total output.   I probably never will because, as well as some utterly brilliant books, his enormous output includes some pretty mediocre stuff.  Even his best books have what normally would be seen as flaws: careless world-building, wonky make-it-up-as-you-go-along plots, unevennesses in the quality of the prose.  I forgive these instantly in a book like Palmer Eldritch, Flow My Tears or Electric Sheep.  In fact they are part of the effect.  In a lesser book, like Martian Timeslip for instance, they start to jar.

I picked up this book because I read somewhere that it’s going to be made into a film – how many Dick novels and stories will that make it which have now been filmed since his death? – and I was curious to know why this book had been chosen.

The book is actually an early stab at what was to become VALIS.   The entity VALIS (Vast Active Living Intelligent System) is in this book also.  And, as in the novel VALIS, the book deal in a fictionalised way with the experience which Dick had in real life, which he came to think of as a communication from a vastly intelligent non-human being.   Dick claimed that this experience imparted information about his son’s medical condition which allowed him to seek appropriate medical help and save his son’s life.   It seems an odd move to have  had such a strange and overwhelming experience in real life, and then embed an account of it within the made-up strangenesses of a science fiction novel, but this is what Dick did.

As in VALIS, Radio Free Albemuth uses the device of having two separate fictionalised versions of Dick himself.   In VALIS one of these was called Philip K. Dick, while the other was called Horselover Fat (the anglicisation of Dick’s Greek first name and German surname).  Here one of the two stand-ins for Dick is Nicholas Brady, who has the experience of the strange communication which enables him to save his son (and, like the real life Philip Dick, at the beginning of the book Nick works in a record store), the other is called Philip K. Dick, and is a science fiction novelist, author of The Man in the High Castle etc etc.

In this book, America is under the tyrannical, Stalinist rule of President Ferris F. Fremont (F being of course the 6th letter of the alphabet), and the novel proposes that we are living in the biblical end times, the world of the Book of Revelations.   An evil empire has the entire planet in its grip, cutting it off from any contact with the wider universe, and a tiny body of revolutionaries are attempting, quixotically, to overthrow it.  In spite of superficial appearances to the contrary, we are still essential in the first century, and persecuted Christians are still pitted against the Roman Empire.

This same notion of Earth as somehow lost and cut off from the rest of the universe, and in the control of malign power*, can also be found in Doris Lessing’s Shikasta and C.S. Lewis’s Out of the Silent Planet (the silent planet being Earth, as seen from the rest of the solar system).  It obviously has roots in the Christian notion of the ‘fall’, and medieval notions of the sublunary sphere, the part of the universe below the orbit of the moon, as a place of corruption.  But it also connects I think with Plato’s Allegory of the Cave, the idea that in our ignorance we are looking at shadows on the wall of a cave while the real world goes on outside in the sunlight.

Plato was thinking about ignorance, while the idea of the fall is about sin and disobedience, but for me the idea that something that should be there is missing has a powerful subjective plausibility.  That’s how te world feels to me a lot of the time: something that should be there is missing.   I suppose this is rooted, at least in part, in a basic and unavoidable fact of human existance.  Even though we ourselves are part of the world, we can only know the world through our senses, at one remove, so that the real unmediated universe always lies tantalisingly beyond our reach.

*See also a previous post about the sonnet ‘Batter my heart’ by John Donne.  It portrays a human soul as a town captured by a hostile power.