Because of my new-found interest in drawing, my wife gave me a book recently called A Short Book about Drawing, by Andrew Marr, the TV journalist, who turns out to be a pretty good drawer.  It’s a charming book, and much of it is simply about the pleasure to be obtained from the act of drawing itself, but at one point Marr speaks with some regret about the influence of Marcel Duchamp on our conception of art, and about all that has since emerged ‘like a vast glittery spout of magma from Duchamp’s urinal.’

He’s referring to the urinal which, in 1917, Duchamp signed with the name ‘R.Mutt’ and decreed to be a work of art called ‘Fountain’.   A work of art from then on wasn’t necessarily a painting or a sculpture.  It didn’t even have to be something that the artist had made.  It could be anything that an artist chose to designate as such.  Indeed, from what I’ve read, Duchamp deliberately chose objects for this purpose which had no meaning or significance to him at all.  What a strange, violent, mocking thing to do!  It’s as if I were to reprint a telephone directory, call it ‘Contact’ and declare it to be my next novel – and people were to accept it as such, and make themselves read it and think about it as if it meant something!

If anything can be a work of art if an artist says it is (including an object that means nothing even to the artist!) this raises the question of who gets to be an artist.  Who gets this strange fetishistic power?  In the past artists would have been identifiable to most people, at least to some extent, by the skill evident in their work.   Some artists were doubtless much better than others at acquiring wealthy patrons, but some degree of skill in the creation of images would have been a necessary prerequisite also.  Now this was no longer the case.   An artist could be created by patronage alone.   With beauty and meaning set aside, the wealthy could create artists out of whomever they chose, and those artists could then return the favour by taking trivial objects and turning them, for the wealthy, into a kind of gold.

The emperor gets the last laugh, after all.  Who cares if the clothes are real or not, as long as they can be bought and sold? 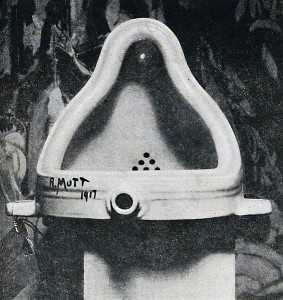