Science fiction is usually set in the future.   It’s true that quite often it is only nominally the future -much science fiction is set in worlds that are no more plausible as a depiction of a real future than, say, Arthurian romances are plausible as depictions of a real past-  but even so, one of the functions that SF performs is providing an imaginative way of thinking about where we may be headed.

An SF writer must primarily be a story-teller, though.  There has to be tension and jeopardy in the imagined world, in order to generate a story.  Fictional utopias, worlds where all humanity’s problems have been solved, are notoriously screamingly dull.  (Which sometimes makes me wonder if we would really even want to live in a utopian society, or whether, like David Bowie’s Saviour Machine, we’d feel compelled to destroy it in order to get away from the tedium of it all?)  It’s much easier to set an interesting story in a dystopia, or at least in a world which is at least as flawed as the present, and I’m not sure its even possible to set an interesting novel in a utopia unless the utopian society is placed under some kind of external threat ( as in Huxley’s Island, or Le Guin’s The Dispossessed).

I mention all this because I like to read about positive developments that might improve things in the future, and as someone who writes about the future (and worries about it, as we all do), I always feel that I’d like to disseminate what I read, but in fact it is very hard to do so through the medium of SF.  I think maybe I just need to accept that non-fiction is a better medium for writing about such things. 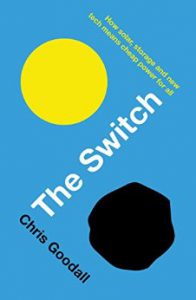 The Switch (by Chris Goodall) is a very readable book about the hopeful possibilities arising from the fact that solar power is becoming cheaper year on year, to the point where it will soon be a much more cost-effective source of energy than fossil fuels.  Early solar panels cost many thousands of dollars per watt of power,but ‘by the mid 1970s the figure had fallen to $100 a watt.  Now the cost is about 50 cents and the decline still continues’ and ‘in the sunnier parts of the world, photovoltaics already offer electricity at lower total cost than other forms of power’.  Even in more northerly countries, PV [photovoltaics] is dramatically reducing in cost: ‘In Britain the dramatic fall in the price of solar panels has already pushed PV almost to cost parity with planned gas-fired power stations’.  And ‘because PV is so utterly reliable and almost maintenance-free, it is a perfect investment for pension funds seeking consistent yearly returns for the thirty-five years of a panel’s life.’

But there’s an obvious problem with PV which is that sunlight isn’t constant and can’t be turned on and off to meet demand.   Actually no other source of power can be turned on and off at will like that without at least some cost, but clearly PV doesn’t work at all in the night,  generates power in the middle of the day whether it is needed or not, and generates less power when the sky clouds over, even if more is actually needed during those times.  Most of the book is therefore about developments around the world aimed at addressing this problem, which the author sees as eminently surmountable.

There are a number of layers to this.  One is to manage demand more effectively.   There are already schemes whereby companies are paid to enter into an agreement to cut energy use at short notice when there is a spike in demand, which can often be done without affecting productivity.  For example, a papermill produces pulp and stores it, and then turns the pulp into paper.  Provided there is a sufficient store of pulp, pulp-making can be paused at any point, without reducing the overall output of the mill.  In the same way domestic fridges and freezers can be turned off for short periods without ill-effect and chargers for electric vehicles can be set to stop charging at periods of peak demand, and resume charging at periods of lower demand.

Another way is to store the energy.  Pumped storage – that is: using surplus power to pump water uphill, and then allowing that water to flow down through a turbine to generate power at times of energy shortage- has been the main means of doing this on a large scale, but there are a limited number of suitable sites for this.   There are also new solar powerstations being built which, instead of using PV, concentrate solar energy to generate heat that can be used to power turbines even when the sun is down (Morocco has made a big commitment to this approach and is currently developing the largest such scheme in the world).  Increasingly though, large-scale storage in batteries is becoming an option, because batteries are reducing in cost year on year, much like PV, albeit not quite so quickly.   In countries where there is steady sun throughout the year, this book suggests, a combination of PV and banks of batteries may on their own be able to provide sufficient power for household use.

However in countries with long, relatively dark winters, batteries will not be sufficient.  The later chapters of this book explore emergent technologies, not yet as far advanced as PV or batteries, which can use surplus power to synthesise  fuels, by extracting hydrogen from water and combining it with carbon dioxide to make methane or ethanol.  One of the attractive things about this approach is that there is an existing infrastructure of storage tanks and pipelines which are currently used for fossil fuels, as well as gas powerstations that could equally well run on synthesised fuel.   The book describes a range of different approaches being taken around the world towards mimicking what plants do naturally, using sunlight to make fuel, and doing so on a commercial scale.

I couldn’t make a novel out of all this -perhaps some people could, but I couldn’t- and yet it is a fascinating story.  I guess the truth is that the really creative people here are not story-tellers who imagine worlds, but the scientists, engineers,  entrepreneurs and politicians, who actually make things happen in the real world that we all inhabit.  I know that a lot of people would argue that the rate of change towards these new technologies is still far too slow to tackle climate change, but that’s a question about political will.   The political choice to shift away from fossil fuels is only even theoretically possible if viable alternatives are available.  The encouraging story this book tells is that they are, and getting more viable all the time.  The other encouraging point -and I’m simply not qualified to judge how realistic it is- is that a time is arriving where market forces themselves, regardless of politics, will pull us in the direction of solar power and power storage, and away from fossil fuels.

One thought on “Optimistic writing”