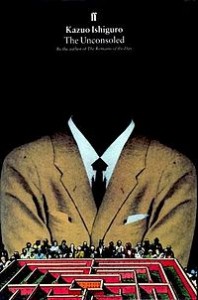 What’s your favourite book?   It’s a meaningless question of course.  If you’ve read a lot of books, you can’t really have one favourite.  But if I’m asked the question I’ve been known to answer The Unconsoled. I first read this some 16 years ago when it first came out, having heard Ishiguro talking about it on the radio.   I have just re-read it to see if I still rated it as highly.  I did.  It’s a long book, but I could hardly bring myself to put it down.

I was drawn to the book in the first place when I heard Ishiguro say that he had decided to write the book using the narrative technique of human dreams.  In a dream, he explained, a person can go through a door in one town and emerge in a different town (saving the many pages of rationalisation and explanation you might need to get a person from one place to another in a realistic novel).   These jumps happen frequently in the novel, as do other dream-like devices, such as one  person doubling up as another, or of a person standing outside a building being able to see what is going on inside, or a person or thing from the past turning up in a completely different context without this causing anyone any surprise.  But the novel isn’t in any way ‘dreamy’.   The dream-technique is used for compression, not for random weirdness, the writing is in Ishiguro’s usual spare exact stiff-upper-lippy prose, the characters are precisely and poignantly drawn, and even though the situations are often bizarre, the human relationships are painfully real.

The story is about an eminent pianist, Ryder, arriving in an unnamed European town (the town is unnamed but the characters have German-sounding names: there is a definite debt to Kafka in this book, and in my opinion, if not a debt then a faint kinship with the work of another of my  favourite writers, Philip Dick).  The town expects great things of Ryder, and he is very taken with the idea of himself as a great and important man, but what unfolds (for I guess some 200,000 words) resembles  one of those anxiety dreams (I have them frequently) in which you are trying to get somewhere, but are constantly thwarted by endless complications and obstacles (for example by a brick wall built for no reason right across a street).  Or the ones in which you are never quite sure what part you are supposed to be playing.

In the course of this, a whole cast of characters appears, mostly rather lonely and tortured souls, many of them so driven by a need to redeem themselves in the eyes of their imagined superiors, or their parents, or their own eyes, that they neglect and forget about those they are supposed to love.  (Themes apparent also in his previous novel The Remains of the Day).   There are many truly heartrending moments, for example when parents simply fail to see how much their children need their approval, but the book is also often funny enough to make you laugh out loud.  The banality of everyday thoughts are wonderfully mocked by having the vain and self-centred Ryder expressing them in the same pompous language that he uses to talk about his big projects, and often the book is simultaneously funny and excruciatingly sad.  Here is Ryder, who has promised to spend an evening playing boardgames with his little boy, but is distracted by… the need to read every word in the local paper:

Returning to my sofa, I saw that, by putting my plate down on a cushion beside me,  I would be able to eat and continue to read my newspaper at the same time.  I had decided earlier to examine the newspaper very carefully, scrutinising even the adverts for local businesses, and I now continued with this project, reaching over occasionally to my plate without taking my eyes off the newsprint.

There’s no way of doing the book justice in a summary, and I’m sure that, even on two readings, I have only understood part of what is actually there, but it certainly remains one of my favourite books, unsurpassed I think by Ishiguro himself, and I’m surprised it isn’t more famous than it is.

I particularly love the idea of using the narrative devices of dreams because my own view is that dreams are the original archetypal stories.   When people say they don’t have the imagination to write stories, I often wonder how it is that people can say that, when every night they weave themselves complicated intricate stories without even trying, rich in layers and layers of meaning, and often full of truths which waking minds just don’t grasp.  Freud saw dreams as the disguised representations of desires, but that’s only a little part of what dreams do.  In my experience dreams tell me who I am, and often direct a sharp light onto my own self-deceptions, my own little acts of cowardice.  And it is exactly that kind of light that The Unconsoled enlists to shine into the lives of its characters.

4 thoughts on “The Unconsoled by Kazuo Ishiguro”