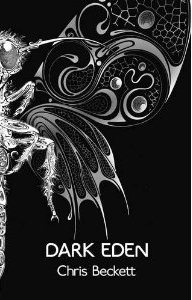 This (approximately) is what I said about Dark Eden at the launch party last night at Heffer’s bookshop in Cambridge:

Eden is a planet without a star, that’s why it’s dark.   (I believe such planets are thought to be possible by those who know about these things, and may even be more common than the kind of planet that circles round a star.)

Eden isn’t completely dark though. There is life there, powered by the planet’s own heat.   (I believe this is thought to be possible also).  The life gives out light, and everywhere, at higher altitudes, is warm enough for human life.

There is no day or night, there are no seasons. The only rhythms by which time can be measured are biological ones.

Five people stumbled on the planet in a damaged spaceship. (Interstellar travel, is something I’m not sure really is possible, but without it there wouldn’t be much of a story) . These five people spent some time on Eden, and then three of them decided to try and get go back to Earth in their broken ship. The other two decided to remain, a man and a woman – Tommy and Angela, or Gela as she’s known. They didn’t know each other before then, and Gela wasn’t sure she even liked Tommy that much, but they decided to stay and wait for help to come.

160 years later their descendants – the descendants of one not very successful marriage – are still waiting, in a single, inbred community that calls itself Family, stuck in one valley that is lit and heated by trees that pump sap down into hot rocks underground, and pump it up again.

And of course, in a forest of hundreds of thousands of these geothermal trees, those pulsing sounds all merge together, and becomes a constant hmmmmmmmmmm that is the background to everyone’s lives.

These people have never left the valley. It is surrounded by icy mountains, which, without trees, are also completely pitch dark.

The people live by hunting and gathering, using implements made of stone, wood and animal sinews. They still live in hope that one day they will be able to return to a planet full of light that none of them has ever seen. They long for that light and for the legendary wonders there, like boats that fly, and horses you can ride on, and lecky-trickity that runs along strings.

And for this reason they believe they must never leave the spot where people first landed.

The central character is a boy called John Redlantern, who decides all this is crazy, and is determined to get people moving, out of the valley and across the mountains. To achieve this he commits a terrible transgression, and from this first transgression, more follow, bringing violence and hatred into the world.

The story is told partly by John – and it is John who is telling it in the passage I’m going to read you – partly by his girlfriend Tina Spiketree (sort of his girlfriend. Monogamy is not part of the culture of Eden), partly by his loyal cousin Gerry, his clever, lame cousin Jeff and his kind aunt Sue.

So. Imagine a forest clearing, under a starry sky. The trees have no leaves at all, and they are warm, or even scalding hot to the touch. They have luminous flowers, and small creatures vaguely reminiscent of earthly bats, swoop and dive among those shining flowers, hunting creatures vaguely reminiscent of earthly insects. (Though on Eden bats have arms as well as legs, and small almost human hands)

500 people are packed in round the edge of the clearing: old, young, adults, children, dressed in animal skins, many with badly deformed faces or twisted feet. They are all looking into the middle of the clearing, where there is a circle of stones – their most important relic of all – to mark the place where the landing vehicle came down from that spaceship 160 years ago. John Redlantern is among this crowd of people.

In the centre of the clearing five people have been acting out the story of how those first five people came to Eden. Two of them are playing Tommy and Angela, the ancestors of everyone present (People even swear by them now: ‘Tom’s dick,’ they say, ‘Gela’s tits’ or ‘Gela’s heart’). One of them is playing a man called Michael who is one of the three who decided to try and get back to Earth. The Three Companions as they’re called.

People swear by Michael sometimes too but when they swear by him, for reasons that you’ll soon see, they always say ‘Michael’s names.’

This part of the story is called Michael and His Names, and it’s the bit that kids love the best.

‘Where is this place anyway?’ Angela asks. ‘What do you think it’s called?’

‘I don’t know,’ says Michael. ‘Let me think. Perhaps we could call it…’

‘It’s Eden!’ yell out all the kids round Circle, because of course any fool knows that!

Michael frowns, like he thinks he’s heard something but he’s not sure. He holds his hand to his ear.

The kids all cheer.

She’s pointing to a whitelantern tree.

‘It’s a tree!’ the kids yell out, laughing. How could anyone be so dumb as to not know what a tree was?

I guess it made everyone feel good to see Angela and all of them not knowing these things we knew so well, after we’d had to listen for so long to that big big list of wonderful things they had on Earth which we didn’t understand at all. It was kind of reassuring to know that they didn’t even know what a tree was, when we were feeling useless useless for not knowing about metal and telly vision and horses and the Single Force.

Michael hesitated. The kids laughed. They loved all this. I suppose I did too. I loved it but I at the same time hated it for trapping us and making us feel so helpless and babyish and small.

The grownups are smiling and laughing too, and a lot of them are joining in with the kids. Everyone was tired tired, what with the wakings being changed, and the long weary list of Earth Things, and the Laws and the Genda and all, but now everyone was brightening up again.

‘We’ll call it…. a… tree!’ goes Michael, who is really a skinny little guy of forty wombs or so called Luke Brooklyn who’s mainly known in Family for being clever with blackglass.

‘And what’s this?’ asks Tommy, looking over from Big Sky-boat which he’s trying to fix and pointing at a little jewel-bat swooping overhead.

‘What’s what?’ goes Michael, looking where Tommy pointed. The bat has gone.

‘This!’ says Tommy, pointing to another bat.

‘This here!’ says Tommy, showing him another bat again

‘Oh that,’ says Michael. ‘Well I don’t know about that. I’ve no idea. I’ve never seen anything like it. I don’t know what to say.’

Michael frowns and screws up his face. He can almost hear them but not quite.

He holds his hand to his ear.

He frowns like he still can’t hear, and he scratches his head.

Michael was called the Name-Giver because he gave us the words that we still use for all the animals and plants that live in Eden, and found out things about them like how they came up from Underworld when everything was ice, and how dry starflowers could feed our skin like Sun did on Earth. But in the Show he was also the name-hearer, because he didn’t actually choose the names. He only heard us, faintly faintly, shouting them back to him from the future. And then he took them, and gave them to the things in the world, and sent them out again to us the slow way, through the five six long generations between us and him.

He nods. He smiles.

I hope you read the book, and I hope you enjoy it.

If you do enjoy it, please do recommend it to other people.

If you don’t, though, I advise you to keep it to yourself.  I’d hate you to show yourself up.