“I don’t like science fiction. I like my novels to be about ‘real’ people doing real things in the real world,” was the initial reaction of Emma Higginbotham in an article about Dark Eden in the Cambridge Evening News. She goes on to say,  “I decide to read the first couple of pages and skim through the rest. But to my amazement, I’m completely hooked by page two, and devour the whole thing in a few greedy sittings.”

Why is this?  The same people would, I imagine, quite happily read a book set in the past, or in a faraway country, or an imaginary country.  They’d even happily read a book set in the future (1984), or one with science fictional elements such as time travel (The Time Traveller’s Wife), cloning (Never Let Me Go), or the extinction of human kind (Children of Men), provided it was by an author known as ‘mainstream’.  So why this squeamishness about things that say ‘science fiction’ on the tin?

It wasn’t always so.  In the 60s and 70s, bookreading households would have thought nothing of having Day of the Triffids on their shelves, or maybe a few Ballards.   My father, I guess, classes as an SF fan, since he had a whole row of SF books (Pohl & Kornbluth, Heinlein, van Vogt, Ballard…), but it was my mother who recommended books to me by John Wyndham and Brian Aldiss: it just wouldn’t have struck her that they were SF and therefore beyond the pale.  Of course even then there were harder core SF books that my parents would have regarded as outside their range, but my point is there was a permeable membrane between SF and the rest of literature, not (to mix metaphors completely) a Berlin Wall.   Somewhere between now and then, SF has come to be regarded by many as the exclusive province of Comic Book Guy. 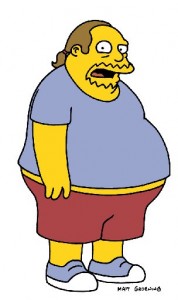 Yes, some science fiction is poorly written, some is ‘toys for the boys’, some caters for immature, and sometimes not very attractive, impulses.   But isn’t that true of romantic fiction also?   Isn’t it true of any kind of fiction at all?  I’m not saying that I think everyone should like all science fiction, only that they should be prepared to admit the possibility that they might like some of it.

All fiction works by making stuff up, partly for fun and partly to provide a new imaginative perspective on the real world.   It seems a pity to me – and not just because it means less people will buy my stuff – that a particular kind of ‘making stuff up’, should be so readily dismissed by readers and writers.  That seems to me to be throwing away a very rich resource indeed.

Non-science fiction readers who read my books, often seem to like them to their own surprise (like Emma Higginbotham, or like the judges of the Edge Hill Prize).  I would really like to persuade more to give it a go.