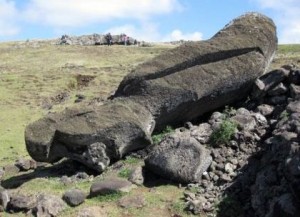 I was interested by a recent debate on Radio 4 between Friends of the Earth’s Tony Juniper, and the former Tory Chancellor of the Exchequer, Nigel Lawson.   They were talking about shale gas, and Lawson’s position was simple: this stuff is cheaper than renewable energy, and therefore that’s what we should go for.   Tough, hardnosed, realistic.  Like the guy on Easter Island, who argued that wood was cheaper than other fuels, so it was just silly not to chop down the last tree.

‘But how are we going to make boats?’ someone wondered, as they were all toasting themselves round the fire.