The cover for my latest and seventh novel, due out in April 2019.

I’m feeling very chuffed and… well… honoured, to be the Guest of Honour at this year’s Novacon in Nottingham.  More details here.  It runs from 9th-11th Nov.

It’s a cliche that you can’t judge a book by its cover but in my experience the cover can make quite a difference to the whole reading experience.  So I’m really delighted that Corvus have decided to re-release the first four novels of mine they published in these really beautiful new covers by Richard Evans.

Here are the three Eden books: 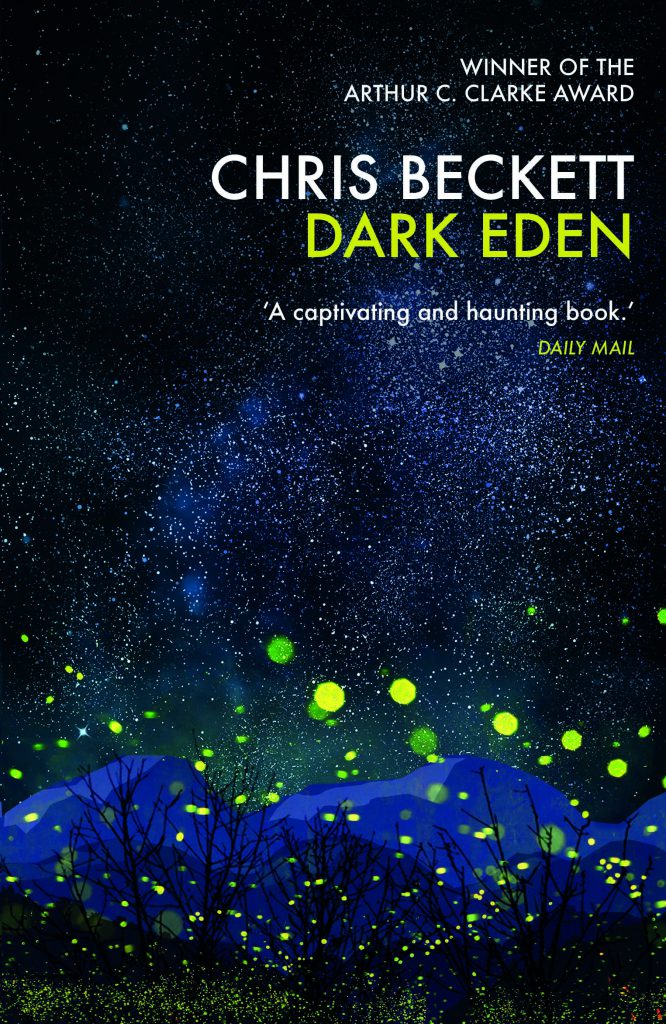 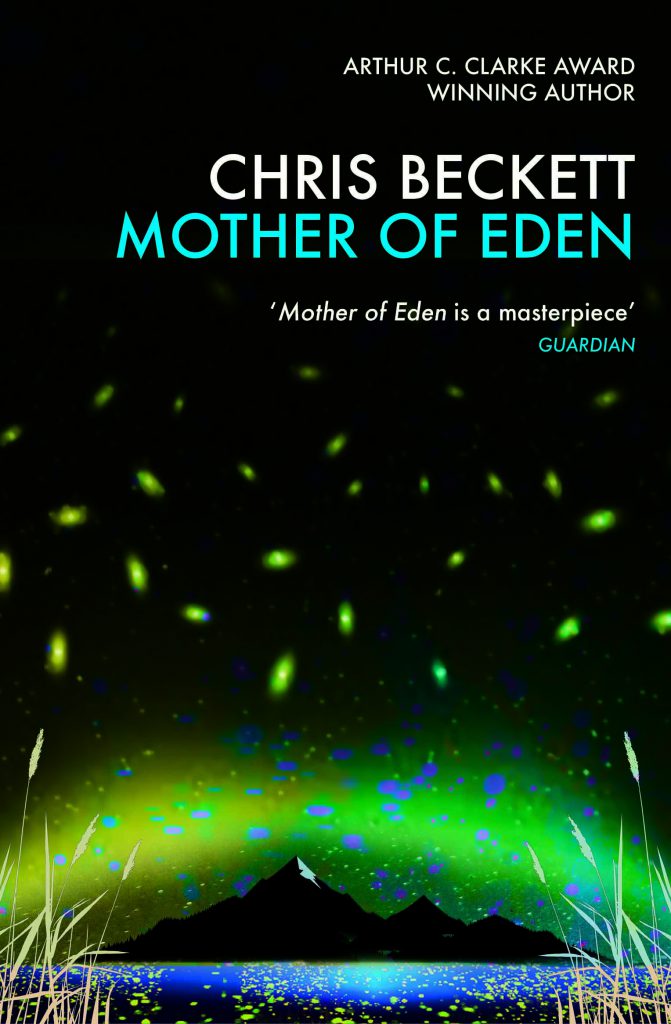 And here is my first novel, The Holy Machine, which has already had several very different cover designs:

Here’s the new cover for the paperback version of America City.  It will be out on Sept 6th, and can be preordered now.

I’m very pleased to be part of this original audio collection of six SF stories, which have just been published by Audible.  Most of my books, including my latest short story collection Spring Tide, are available as audio books, but this is the first time that I’ve had a story whose first appearance was in audio format.

My story is called ‘When Will We Get There?’  (the title being a deliberate homage to one of my very favourite stories, Philip K. Dick’s ‘I Hope I Shall Arrive Soon’), and it is beautifully read by Clare Corbett.

The other five stories in the collection are by An Owomoyela, Nikesh Shukla, Lauren Beukes, Ken Liu and Paul Cornell, so I’m in distinguished company. 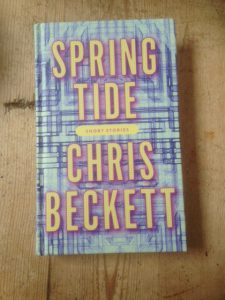 It’s always a big moment when I hold the book in my hands for the first time, and I love what Corvus has done with Spring Tide.  My 21 stories are no longer just words, no longer just pixels on a white screen.  They are a physical object which looks good and is satisfying to hold.  There’s something magical about that, and it never seems to fade.

If in or near Cambridge on Nov 2nd, do come to the launch of America City at the delightful The Locker Cafe on King St. (Please RSVP to Kate Straker as per invite below, so she has an idea of numbers) 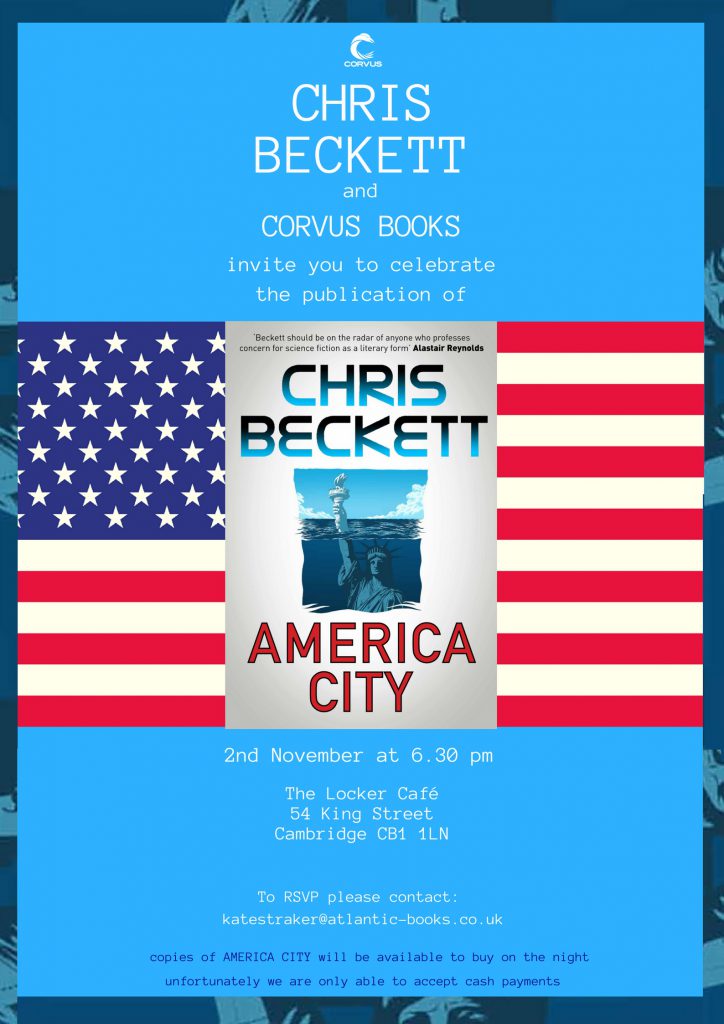 I’ll be at Worldcon 75 in Helsinki next week, and I’ve been asked to take part in a panel on ‘Write Long and Cut, or Write Short and Add? (Is it better to write as much as possible and then edit out, or vice versa?)’.  If you’re at the con, I hope I’ll see you there!  In the meantime, here are a few thoughts:

I’ve been doing a bit of drawing lately (one of my  recent efforts is below) and one of the things I’ve learnt about that is that you need to be careful to get the basics right before you commit too much to the detail.   If you are drawing a face for example, no amount of detail will make the picture look like its subject if the overall shape is wrong.  The temptation is to get too engrossed in, say, the shadows around the eyes, only to realise later on that the eyes are too close together, and that at least one of them will need to be rubbed out completely and drawn all over again.

When writing fiction, there is a similar danger of over-committing to detail at too early a stage.  This can result in beautifully crafted scenes which turn out not to fit in, but which you are reluctant to cut because you like them and have committed a lot of time to them: a lot more time can be wasted trying to make the book fit the scene rather than vice versa.

A big difference between drawing from life and writing fiction, though, is that there is no external object to act as a guide: you are not trying to reproduce something in front of you, but rather you are tapping into your knowledge, experience, and subconscious to create a new object that didn’t previously exist.  Quite often, the overall shape may actually emerge out of details.

My novel Daughter of Eden, for instance, only came alive for me when I decided to tell the whole thing from the point of view of Angie Redlantern, and for that to happen, I first needed to bring Angie alive for myself by working over scenes told in her voice.  Similarly, early drafts of The Holy Machine felt to me they were missing a certain something until I worked out how to write the opening pages. In both cases it was the detail of the voice, and how that voice described its world, that were the key to the entire book.  I could have drafted out all the plot outlines I liked, but without knowing how the story was to be told, they wouldn’t have come to anything.

So it is a matter of writing something that vaguely resembles the story that I want to write, or the beginning of that story, and then working and reworking the material until it starts to feel lively. I always start a writing day by revising what I wrote on the previous day, and not infrequently I will go right back to the beginning and revise everything I’ve written so far before carrying on.  It’s slow, but it seems to be necessary in order to dig myself down into the story.

As to whether to ‘write long and cut, or write short and add’ I don’t have a straightforward answer.   What I’ve noticed is that, as a piece of writing develops, my sense of the centre of gravity of the piece gradually changes and I start to notice what I think of as expansion points and contraction points. In early drafts of the first half of Daughter of Eden, the story was told from multiple viewpoints like the other Eden books and Angie was simply one of several main characters.   As I worked and reworked it, I decided Angie was to be at the centre of it, and that all the foregrounded characters were going to be women (Angie, Mary, Trueheart, Starlight and Gaia), while the stereotypically ‘male’ story of war and fighting would be pushed some way back into the mix.

So expansion points are places in the text which seemed of relatively minor importance to start with but are now more important, perhaps to the point where they now feel like the story. In some cases, material which was little more than a connector between two scenes, can turn out to be more important than the scenes themselves. One set of expansion points in Daughter of Eden concerned the Davidfolk’s rituals around circles and the idea of homecoming. That stuff was just a detail at first, one of those things you put in to make a scene a bit more concrete, but it became absolutely crucial to the overall shape of the book, and so I expanded and developed all that, not only by including more detail (the circles, the song, the dots on the foreheads of guards…), but by incorporating those ideas and beliefs into Angie’s thinking.

Contraction points, on the other hand, are places in the text whose importance, or necessity, has diminished over time, so that they need cutting back, or cutting out entirely.  In the case of Daughter of Eden this included scenes seen from the viewpoint of male characters, some of which I cut altogether, while others were shortened and retold as observed by Angie, or reconstructed by Angie thirdhand from stories told by others, or relayed by Angie from scenes that Starlight participated in and told her about.

So I suppose my conclusion from all this is, write what you can, and be prepared both to expand and cut. 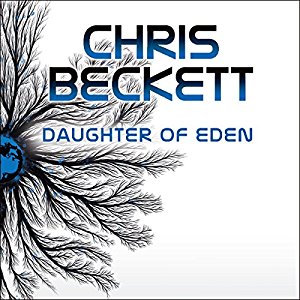 Daughter of Eden is now out as an audiobook from Audible.   It’s read by Imogen Church and, listening to the sample, I think she’s done a really wonderful job of it.  I felt I was listening to Angie Redlantern herself telling the story.  Which was a strange and rather moving experience, given that Angie (possibly my favourite Eden character) came out of my own head.  Click on this link for the free sample and judge for yourself.

My next novel, America City, is now at the proof-reading stage.  It even has an Amazon page already. I’m getting rather excited about it.  It’s starting to feel real.

This book will be a new departure for me in that all three of its predecessors were set on my sunless planet, Eden, but this takes place in North America in the twenty-second century.  No more glowing forests or hmmmphing trees, though I think readers may still be able to spot links of various kinds between America City and the Eden books.

Like my previous novels it’s to be published in the UK by Corvus, and should be available from 2nd November.

And there’s another book behind it too, my next short-story collection, Spring Tide, already good to go, and also to be published by Corvus.  (It also has an Amazon page).  It should be coming out in the UK in the Spring of 2018.  This is a new departure too.  I have published two previous collections, and one of them won me a prize, but this is my first collection to consist entirely of previously unpublished stories, and my first ever published fiction, whether in the long or short form, that really could not be defined as science fiction.